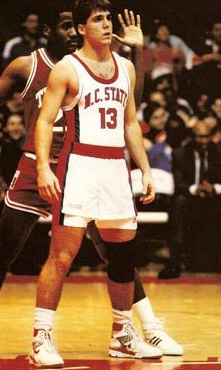 In another slap in the face to NC State, one of the “top” ACC officials decided to throw Tom Gugliotta and Chris Corchiani out of the basketball game.

Welcome to another example of how awful the Atlantic Coast Conference has become and little league officials value NC State and our heritage and history.

Today Karl Hess took his insanity one step further and joined the NC State officiating Hall of Fame alongside legends like Rick Hartzell, Larry Rose, Roger Ayers, Lou Bello, John Clougherty (at Maryland in 2000) and many, many others when he chose to eject NC State legends Tom Gugliotta and Chris Corchiani from the RBC Center in front of 16,000 fans and a regional television audience. Pack Pride is reporting that Hess apparently asked security to eject a student a few plays earlier for saying “You Suck,” but was told that isn’t enough of a reason.

In my opinion, the first amendment of the US Constitution provides that there is almost there NOTHING that a fan can say at a game that should warrant an ejection by an official – absent credible threats of physical violence or attempts at starting violence. Since the game ended, Corchiani and Gugliotta have stated that they did not even utter an ounce of profanity.

[4:20pm Update] As I was writing that^ exact paragraph, the national blog, Deadspin was agreeing with me and posted the following comments in this entry.

Retired NBA star Tom Gugliotta was ejected by referee Karl Hess in the second half of of North Carolina State’s home loss to Florida State today.

We don’t know yet what it was Googs said to get the thumb, but CBS’s Matt Norlander reports the former Wolfpack star (along with another former NBA player and NCSU alum Chris Corchiani) was ejected by Hess.

RBC Center is owned by a public corporation, and North Carolina State is a public school. Thus, free speech rules apply. Unless Gugliotta was threatening to commit a crime or engaging in speech that could injure others (i.e. “Fire!”) he has the right to sit there and say anything he wants. It’s protected speech. [ACC Network]

Since the game ended, Corchiani tweeted the following from his account @Chris_Corchiani:

Karl”rabbit ears” Hess didn’t like the fact Googs and I told him he was having a bad day, inconsistent, and telling the truth. #horribleness

..and, since all of this has been written…we ran across the following comments from “SeaBarrister” on Pack Pride’s message forums:

I believe there may be 1st Amendment issue here… (I’ve been thinking about this ever since the Presby fan was thrown out of the Dean Dome.)

Googs and Corch were removed by an RPD police officer who was exercising the police power of the state (due either to the fact that he was executing duties in his role as a law enforcement officer, or as an agent of the state contracting to a state institution – NC State). The RBC (or PNC) Center is at least a limited public forum for speech (the state even provides “cheer” leaders). Throwing out a patron based on what was said, is a content based restriction of speech (at best) or a viewpoint non-neutral restriction at worst. (is it all commentary on officiating, or just negative commentary that will get you tossed). As such the restriction must survive a strict scrutiny analysis to be valid (threats, “fire” in a crowded building, etc.. would pass such scrutiny, “Karl Hess, you ******* suck” would not.)

Certainly the offending behavior is not about the colorful language, else Coach K would never make it to the first TV timeout – neither would most players for that matter.

The only remaining question is whether or not a patron waives his first amendment rights by utilizing the “seat license.” I’m certain that the school officials believe that he does, but I’m not so sure. First, the freedom of speech is a fundamental right and may not be waivable at all. Second, if there is an ability to waive these rights, it seems that such a waiver must be expressly granted. I’m sure that you wont find a signed document from Corch or Googs (or the Presby Fan) that indicates their agreement not to tell Karl Hess what a ******-nozzle he is.

If I were @Mark_Gottfried and Debbie Yow, the following steps would be taken

(1) @Chris_Corchiani and Googs would have their asses in those EXACT SEATS for the last two games of the season if not all of next season.

(2) A review of free speech policies and security responsibilities of the RBC Staff and Raleigh Police Department will be had.

(3) Karl Hess would never be allowed to officiate another NC State basketball game. Period. Ever. Anywhere. We simply DO NOT take the court if Hess is assigned to the court. If John Swofford doesn’t like it, then we will force the issue.

You can follow ALL of the weekend’s hot conversations by clicking here.