Corey Alexander does an “OK” job on the ACC broadcasts, but he was really pissing me off with the constant references to State’s 2006 season. I’m sure he was just trying to illustrate what a good job that KK has done in his first year in Raleigh. But a comparison to Herb’s team that pretty much tanked after January brought back unpleasant memories…and a connection that I don’t want made to this team.

I’m undoubtedly making too much about something that was intended to be a compliment for this State team, because that was the only thing remotely unpleasant about Sunday night’s game.

When a graph is nearly incomprehensible rather than illuminating, it’s time (or past time) to do something different. So since the ACC has broken itself into four groups, it’s seems natural to use three graphs to summarize most of the conference. The bottom group would be titled “Abandon hope all ye who enter here” and doesn’t warrant a graph.

But before we get to the trend graphs, let’s review the basis for the RPI ranges I use for “IN”, “Bubble”, and “OUT”. Back during the days of the Herbble, I correlated at-large bids with final RPI rankings to see what, if anything, there was to see. It turns out for college basketball as a whole, there is too much data scatter to use just the RPI ranking. But when we look at only the power conferences, we get #1-#40 and #41-#75 as a quick and dirty definitions for “IN” and “Bubble”.

But don’t forget the importance of keeping cause/effect straight. These ranges don’t necessarily represent true cause/effect, but they are good enough to use as a starting point for projecting NCAAT bids. Don’t forget that just last year the record for most total losses to receive an at-large bid was broken. Likewise, there is always the chance that the Selection Committee will force us to further refine the ranges that have served pretty well for over a decade.

Since I’m breaking down the trend graphs based on the teams, rather than just current RPI Ranking, take a second to look at the Y-axis to see what RPI range the graphs are illustrating UVa went 2-0 against two of the worst teams in the conference.

Duke also went 2-0, but against L’ville and SYR.

UNC beat SYR mid-week and had the weekend off.

GT coming to Clemson was the perfect scenario to break Clemson’s three-game losing streak. At halftime, it looked like GT might extend the Tiggers losing streak, but they couldn’t hold on. Unsurprisingly, beating GT at home didn’t help Clemson’s RPI ranking. This is the new graph tracking the four teams that have conspired to make things interesting…while simultaneously destroying the usability of my standard graphs.

Miami had a 2-0 week while at the same time making their game against BC interesting. This week was a welcome relief for ‘Canes fans since it broke a three-game losing streak.

The road win to complete the sweep of the Hokies gave the Cards a nice bump and their best ranking in three weeks.

SYR going 0-2 against UNC and Duke isn’t surprising, but the Orange needed something much better than “expected”.

With a mid-week break, FSU had a week to prepare for State…and they weren’t. 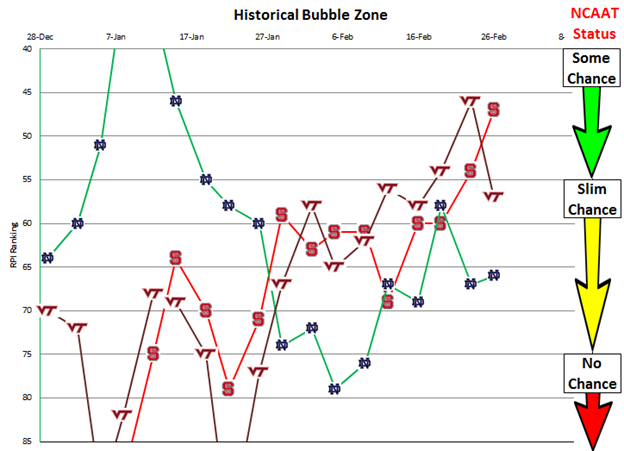 VT had a nice mid-week win over Clemson, but the home loss to L’ville resulted in a net loss for the week.

As we heard several times on the Sunday night broadcast, State is currently on a four-game winning streak and reached a new high-water mark on the trend graph for this season. (Look at how the home loss to L’ville affect VT. State doesn’t want to see that same effect.) Miami is probably right on the edge of doing the minimum required to get in. But no one wants to go into Selection Sunday on a three-game losing streak. They finish @UNC and then host VT to finish the regular season.

Strangely enough, L’ville’s second win over VT hurt their resume by leaving them with only one Top 50 win…@FSU. I saw on one bracket (maybe CBS), that they had moved L’ville to the First Four. Right now, I wouldn’t bet money that they have done enough. They finish with UVa at home and then travel to Raleigh for Saturday’s game.

SYR is in bad shape. They need two wins badly…either two this week (@ BC and then Clemson) or one this week and then one on Thursday in the ACCT.

FSU has six Top 50 wins and even though two of those are positioned precariously ([email protected] #50 and [email protected] #45), they are probably OK as long as they win one this week to finish at .500 in conference. Their week sees them travel to Clemson and then host BC on Saturday.

As we’ve talked for weeks, I thought that State needed a minimum of 10-8 to feel comfortable. They’ve got the 10 wins, but I don’t want to enter Selection Sunday on a three-game losing streak.

I’ve been watching the VT game with Duke as I finish off this update. I agree with the announcers, VT just got another signature win to go along with victories against Clemson and UVA and just like State, they should have done enough to secure a bid. They finish the season at Miami.

Best case, ND is in the same position as SYR. They host Pitt mid-week and then travel to Hoo’ville on Saturday.

Anyone that is interested in bracketology absolutely needs to read this article. Here are a few quotes from the AD at Creighton and this year’s NCAAT Selection Committee chairman that leapt out at me:

While the committee does examine in detail the non-conference opponents of a team under consideration, they also look at the “intent” in scheduling….

So riddle me this….what intent do you see with the scheduling of these icons of college basketball? They look to me like sure wins were scheduled. Does anyone see anything else?

In any event , here are some illuminating comments about the new quadrants being used by the Selection Committee:

I take that to mean that there won’t be huge changes to the selection process this year. That may just be wishful thinking, so we’ll see what we see. After reading the entire article, I tend to agree with the author’s closing thoughts:

But I’ll say this: If the entire committee knows the landscape as well as Creighton’s athletic director, college basketball fans can sleep soundly on Selection Sunday Eve.

About the only good thing about putting this entry up so late is that I can add the Dance Card calcs to our other discussions. I found it interesting/surprising that State came out as the first team after the four teams fighting for a high tournament seed. I guess it’s theoretically possible for the ACC to get 10 teams in, but it seems really unlikely to me.

These standings were after the State/FSU game and do not include VT’s win over Duke. The only thing of interest to me is what it would take for State to get their first two-round bye. You all can do the math as well as I can…well, most of you anyway. 🙂

The odds of more than one team finishing at 11-7 are extremely high. So I’m just going to pull for State and see what transpires elsewhere.

FINAL GAMES OF THE REGULAR SEASON 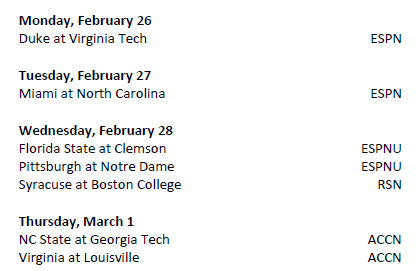 Mercifully, State had the last Saturday off last year. This year that same mercy was extended to Pitt.

Good Lord willing, I’ll put up my “Last Look at the Bubble” next Monday to see who needs what out of the ACCT.